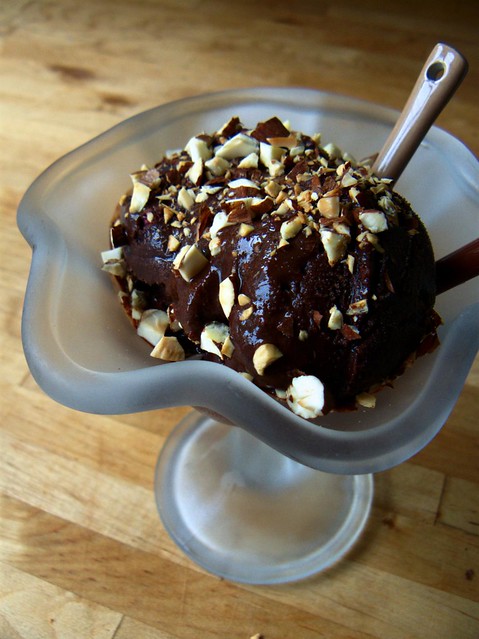 Chocolate and raspberry with chopped nuts is the ice cream flavour Hagrid buys Harry during his first visit to Diagon Alley. Yesterday’s strawberry and peanut butter ice cream consisted of two separate batches of ice cream, but for this dessert I just made a chocolate sorbet and swirled in a raspberry coulis at the end.

Chocolate sorbet is one of my favourite frozen desserts and I think I like it better than any chocolate ice cream I’ve had. It’s just pure chocolate with no cream or coconut or other flavour to get in to the way. I used the recipe from Hannah Kaminsky’s Vegan Desserts, but there are plenty of recipes online if you don’t have that book (this one by David Lebovitz looks good). As far as I can tell the main difference with Hannah’s recipe is that she has you cook the sugar and part of the water into a caramel before adding the other ingredients, which is fun to do and it adds a nice background flavour but it looks like chocolate sorbet works fine without that step as well.

For the raspberry coulis, I cooked 1 1/2 cups (230 g) raspberries, a tablespoon of sugar, and a teaspoon of lemon juice in a little saucepan for 10-15 minutes until they fell apart into a thin sauce. Then I strained out the seeds and chilled the coulis completely overnight. After I had churned the sorbet in the ice cream maker the next day, I combined the two by scooping them into a container in alternating layers and then stirring a little to create swirls.

The sorbet was delicious by itself, but the chopped almonds really took it up a notch. Well chosen, Hagrid! :)

I’m super sleepy right now, so here’s a quick post about the delicious breakfast & scones I made today!

I felt like having a nice leisurely weekend breakfast but I didn’t really want to make something elaborate just for myself when I had too many other things to do. I did have some blueberries I needed to use, though, so I was really happy to come across this Pancakes for One recipe on Hannah’s blog. Okay, most pancake recipes don’t really take very long to prepare, but I guess I just needed the reminder that sometimes it’s worth a little extra effort to make a meal a bit more special. In the end my boyfriend joined me for breakfast even though he didn’t have much time (who could say no to blueberry pancakes?) so I made a double batch of the recipe to share.

The following treat doesn’t technically fit in with my MoFo theme for this month as it’s not a recipe from a blog, but it is from one of Hannah’s cookbooks so I’m including it anyway:

Kumquat poppy seed scones! My parents came dropped by for a visit today and I wanted to make them something tasty they hadn’t tried before. I knew they love baked goods with poppy seeds and I’d just picked up some kumquats at the market, so these scones from Vegan Desserts were perfect! I hadn’t tried kumquats before but I knew I could rely on Hannah’s recipes to turn a new ingredient into an original and delicious treat.  I was a little worried these wouldn’t turn out as I had to replace the margarine with oil, but I don’t think it affected the texture too much (I froze the oil beforehand so it was solid – a trick I’d learned from Vegan Pie in the Sky) and these scones were absolutely lovely.

I hope everyone’s enjoying MoFo 2012 so far. The first week’s gone by so quickly!