The eighth day of this Vegan Month of Food is all about reaching out and making new vegan friends! I figured this would be a great opportunity to hop onto Randomofo and stop by more blogs I hadn’t commented on before, and to tell you about my dinner from yesterday, because I made two new recipes that I discovered during the first week of MoFo. 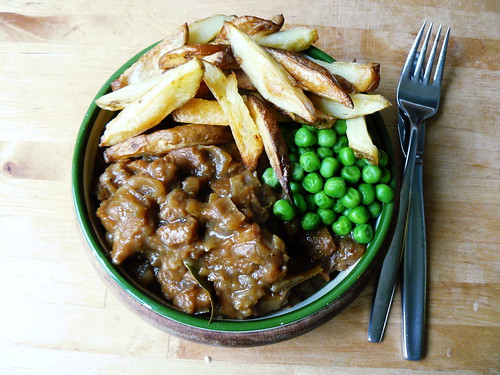 Sara from De Groene Keuken posted this seitan stew as her recreated restaurant meal on Sunday, and I wanted to try it right away. Now, I know my picture doesn’t do the recipe justice (I just wish I’d added some fresh herbs or something) — but aren’t the ugliest dishes often the most delicious? This stew has caramelised onions, mustard, soy sauce, brown sugar, and vinegar, among other things. I cooked it for about two hours and kept adding more of the stock I’d boiled the seitan in, so it was super flavourful by the time it was done cooking. I wasn’t sure about which vegetables to pair it with, but I had peas in the freezer and they went quite well with the chips and stew.

This was also my first time making seitan by kneading plain wheat flour and washing out the starch instead of using vital wheat gluten. It was much easier than I’d thought, and kind of fun! 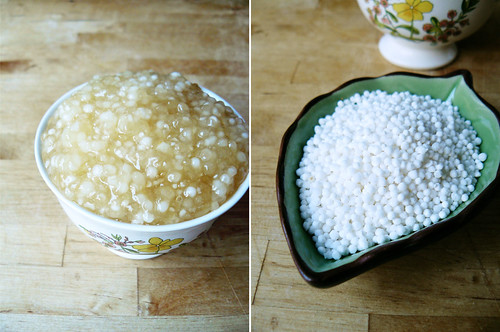 For dessert, I made the lemon sago pudding that Caeli from Little Vegan Bear posted for the childhood meal theme last week. I’d had a jar of pearl sago in my cupboard ever since I’d bought it for this delicious seitan recipe, so I was excited to use it in a sweet dish too. It may not look very appetising (I may have made mine a bit too thick, and I can see why Caeli calls it frog’s eggs!), but I thought it was really tasty and so simple to make. I’ve made pudding with tapioca flour before and really hated the slimy texture, but I thought these little balls were much more pleasant to eat.

– Check out this photo of Sonja from Tartes and Recreation — she’s helping out at her local VoKü to cook meals for thousands of refugees Munich, Germany.
– I saw a few bloggers interviewing each other for today’s theme – such a fun idea! I enjoyed reading these interviews with Kyra and Bianca.

It’s brown food time! (I also made some simmered seitan, but decided to spare you the photos – it looked like brains)

I had planned to spend the first few days of MoFo cooking basic recipes to stock my freezer for the rest of the month, but after this weekend’s bean cooking spree there’s almost no room left! I did make a few seitan recipes today that I’ll be using throughout the month.

On the left are the Gobbler Slices from Vegan Sandwiches Save the Day. I’d already posted about these on Saturday, but I made them more budget-friendly this time by replacing the wine with water, using sunflower seed oil instead of olive oil and replacing the nutritional yeast with more chickpea flour. These changes obviously impacted the flavour a little, but they also cut the cost of the recipe almost in half! With the wine and nutritional yeast, the recipe costs over €2, but without them it’s about €1. Of course this depends on where you get your ingredients and I can’t be bothered to calculate the exact price of all the herbs, but it’s pretty cheap! You can get a lot of sandwiches out of one of these loaves.

The Soy-tan Dream Cutlets from 1000 Vegan Recipes in the middle picture are a little more expensive because they’re made with tofu rather than beans, but at about €0,15 a cutlet they’re still quite budget-friendly. I always like the texture of blended tofu in seitan recipes, but I think the tofu I used this time was a little too firm because I could only add half a cup of gluten flour before the dough got too dry. Apart from that, these were very easy to prepare, as there’s no boiling or steaming—you just roll the dough into cutlets and fry them in a pan! They were a bit bland on their own but I think they’ll be great to use in other recipes. I don’t have this cookbook (yet?), but I was able to find the recipe through the Amazon preview.

On the right are the Chorizo Sausages from Vegan Brunch, which cost about €0,30 per sausage. This recipe calls for a few pricier ingredients like smoked paprika and lemon zest (I used some preserved lemon that I had in the fridge), but these do provide a lot of the flavour and I happened to have them on hand so I think they were worth it. The flavour possibilities for these sausages are endless, though, so you could definitely make them cheaper by using whatever herbs and spices you have on hand. If you don’t have the book (I highly recommend it!), you can find the recipe in the Google Books preview (page 139).

We spent some time house-sitting for my parents this summer, which was pretty great—we got to hang out with the cats and rabbits, enjoy the sun in the garden, and prepare summer meals in my parents’ kitchen. I love our kitchen in The Hague, but it’s always good to be cooking back home. I especially enjoyed trying out my parents’ bread machine, so we ate a lot of sandwiches. This one was my favourite:

It’s a basic wheat bread from the machine’s instruction booklet with rocket, tomatoes, red onion, the gobbler slices from Vegan Sandwiches Save the Day (recipe online here), and a herb dressing from the same book. This was the first time I’d made seitan specifically to slice into sandwiches, and I really like how it turned out. It took me a while to try the recipe because I couldn’t find the instant tapioca it calls for, but I ended up using dried sago, which seems to be very similar if not the same thing. The little balls provide an extra textural element that other seitan recipe don’t have, so I’m glad I gave them a try, but if you can’t find the tapioca I’m sure the slices will still be delicious without it. The seitan recipe makes a lot and freezes well, so it’s good to keep on hand for quick sandwich making. It also seems like the kind of recipe that lends itself well to variations and substitutions, so I’d like to try it with other herbs and spices as well.

I also enlisted the help of the bread maker for my first homemade ciabatta. I’d been meaning to make this bread for a while, but knowing how sticky the dough can be I decided to let the machine do most of the work. I used the method from Nonna’s Italian Kitchen which includes a biga (pre-ferment) recipe that makes enough for several batches of ciabatta. The loaf pictured above was my second try. The first batch was good, but not as airy as I would’ve liked, so I left the dough to rise a little longer the second time. This batch was pretty much perfect, although I should have taken it out of the oven a little earlier—the top was almost burnt! This bread was much chewier and crustier than the shop-bought ciabatta I’ve had, and much cheaper as well, so I definitely want to see whether I can make it without the bread machine at home.

Speaking of inexpensive food, VeganMoFo is coming up, and I’m doing a budget theme. More on that tomorrow!