Over the years, my parents have grown a variety of beautiful fruits in their garden. Some of my favourites have been pears, plums, and strawberries, and currently they’re harvesting raspberries and hazelnuts. The only things I’ve managed to harvest from my own attempts at apartment gardening so far have been a handful of tiny tiny tomatoes and two peas, so I’m always excited by other people’s ability to grow food (especially if they’re willing to share). 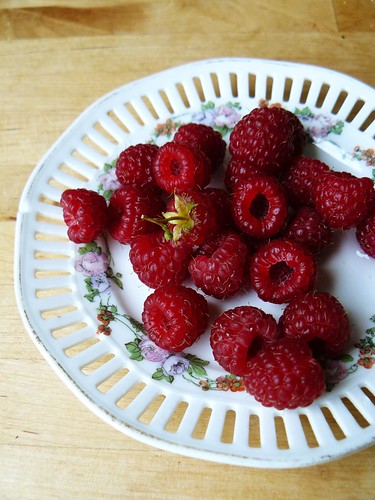 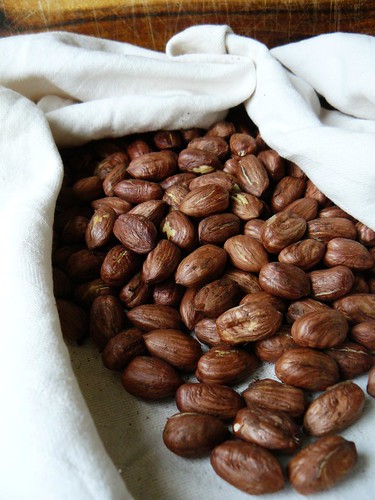 My mother knows how much I love edible gifts, so last month she brought me a little box of raspberries. They were so good I could’ve eaten them all straight away, but I wanted to save some to pair them with the hazelnuts: a homegrown dessert! (With a few ingredients from my kitchen cupboards.) 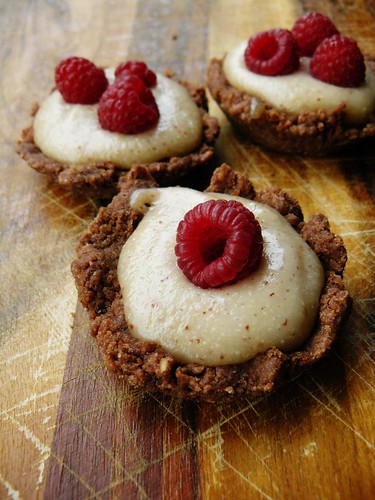 I baked these tartlets using this baking tin that my Grandma gave me. The tin is a little too shallow for muffins, but it’s perfect for little tarts that you can eat in one or two bites. The crusts consisted mostly of ground hazelnuts, flour, sugar, and cocoa, and the filling was a hazelnut milk custard with raspberries on top. The cocoa flavour in the crust wasn’t very strong (I’d meant to garnish them with grated chocolate) but hazelnut and raspberry turned out to be an excellent combination.

Because the hazelnuts were so fresh, they seemed to require a slightly longer baking time than usual: I roasted them at 175 °C (350 °F) for 30 minutes and they came out deliciously crispy and full of flavour. As a result, we (I) ended up eating a lot of them straight from the oven, but I also saved enough to use in salads, pestos, and desserts. The biscuits below were inspired by posts from Amey over at Vegan Eats and Treats!, who happened to post two hazelnut cookie recipes during the Vegan Month of Food. 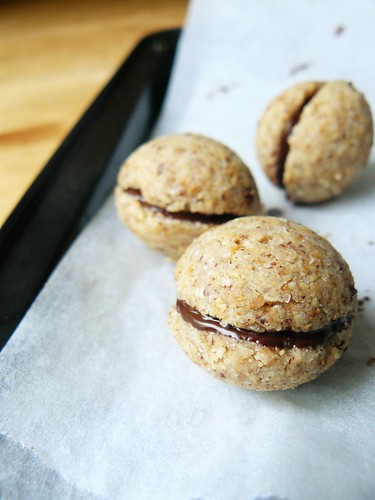 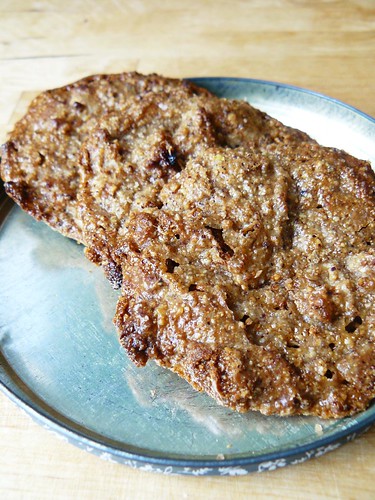 I made quite a few changes to both recipes with varying degrees of success (as the pictures illustrate) so this isn’t intended as a critical review of the recipes I link to. I just wanted to share my pictures and experiences, because the biscuits were a good way to showcase these beautiful hazelnuts!

On the left are baci di dama (“lady’s kisses”) which I based on David Lebovitz’ recipe after reading Amey’s post. I didn’t have a food processor so I ground the hazelnuts in a coffee grinder, and I didn’t have rice flour so I used plain wheat flour instead. I also halved the recipe and used sunflower oil instead of butter or margarine. My dough was too crumbly to be rolled into ropes, so I used a measuring spoon to place teaspoon-sized scoops on the baking sheet and that worked quite well. Mine definitely weren’t as pretty as David’s or as adorable as Amey’s, and they kept rolling over when I tried to fill them with chocolate, but it was all worth it because they are seriously delicious. The recipe yields 45 cookies which may seem like a lot, but they have a tendency to disappear very quickly once have a bowl of them in front of you.

On the right is my attempt at brutti ma buoni, another Italian hazelnut biscuit. This time I really made one too many changes — though I’m not sure which was the fatal one. Again, I used the coffee grinder to grind the hazelnuts (along with the flax seeds). I may have added too much sugar because the biscuits were super sweet. The main problem was that my biscuits spread out in the oven, turning into thin disks with crispy edges and chewy centres — not bad, but not what I was going for. They were also a little greasy, so I think I ground the hazelnuts just a little too long. The flavour reminded me of nougat. I’d like to try them again using a food processor to get them right, but they did live up to their name: ugly but good.

I had a dream last night about people wearing bunches of bananas on their legs over their trousers on an aeroplane. Anyway, this is one of my favourite sandwich fillings:

It’s a layer of hazelnut butter topped with banana slices. I love the combination of the rich, crunchy, slightly bitter hazelnut butter with the soft and sweet banana. The sandwich actually tastes even better if you let it sit for a while, because the banana gets nice and gooey. Mmm.

In the back is a glass of homemade hazelnut milk, also made with that awesome nut butter. It didn’t turn out as deliciously hazelnutty as I had hoped, so I’ll probably use more hazelnuts and less water next time. It was so easy, though – I just blended the nut butter with some water, strained the mixture and added a tiny bit of maple syrup as a sweetener. I’d like to try making a nut milk again soon!