There are few meals that can’t be improved by adding good fresh bread, and from the MoFo posts I’ve seen today, I think most of us agree that trying to choose the best sandwich ever is both impossible and pointless. Instead, I’ll just add another great sandwich to the ones that have already been posted today.

Now, I know from listening to The Sporkful that not everyone considers wraps and flatbread to be proper sandwiches, and I see their point. But why would we exclude them when they’re so delicious? They have the same basic components as other sandwiches. I think the perfect sandwich is different for every person and every occasion, so I like sandwiches like these: 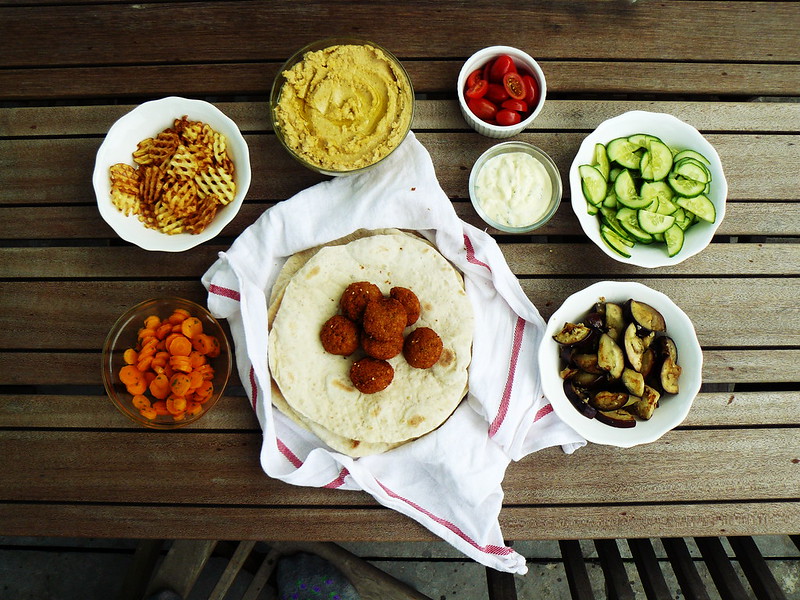 You make a big stack of flatbreads, decide on a few fillings, and surround them with little bowls of everything you have that looks good, then everyone assembles their own sandwich the way they like it. Today, I tried to recreate a falafel sandwich that I love from Maoz: falafel (recipe from Jerusalem), hummus, aubergine, and as many veggies as I can fit on top. (There were actually a few more toppings that didn’t make it into the photo — it was too dark to take pictures indoors so I’d put everything outside, but then it started raining and I had to rush back inside for fear of soggy flatbread!)

Oh, and those are waffle-cut potato crisps on the top left. So good! I make them by using a waffle cutter that looks more or less like this. They’re more annoying to cut than regular crisps or chips, but I had to make them for Best Sandwich Night.

This post from Rosie’s Vegan Kitchen and this post from Flicking the Vs just made me realise I should have put those waffle crisps IN my sandwich instead of on the side. D’oh!

If you’re still reading this, I guess you’ve gotten used to the fact that I seem to be unable to make blog posts regularly. I’ve sort of accepted that fact myself, as well. However, I just noticed the last post I made wasn’t even from this year, and it’s already June 2011! So I guess it’s about time for a little update/catch-up post. Since I last posted here, my boyfriend and I went and found ourselves our own apartment, which means two things for this blog:

1. I now live in a large city with a number of vegetarian restaurants, a vegetarian butcher’s shop, and a bunch of other interesting specialty stores. I used to live in a tiny village, so this is pretty big for me.

2. We now have our own kitchen!

Both of these changes should provide me with plenty of food blogging material! Sadly, however, I haven’t been taking many interesting food shots so far. During the winter I tend to go into slumps where I hardly use my camera at all, mostly because nothing I make ever comes out looking pretty without good natural lighting. Now that summer’s almost here, though, I’m trying to take my camera with me more often. This also made me realise that I probably need a new one, because some of the buttons are broken and it really is kind of old… but I’m cheap, and it’s still working, so it will have to do!

When we’d just moved and didn’t have that many ingredients around in our kitchen, I was really happy to find simple recipes like this Cheater Grilled Cheese from a PPK thread. It’s super easy and flexible, and delicious served with a generous helping of ketchup.

From that same pantry meals thread, I also made these blueberry muffins. Simple and tasty! The recipe isn’t that different from other blueberry muffins, so I guess muffins are just pantry-friendly by nature!

This was one of the first actual meals we made: The Unfried Fried Rice from Appetite for Reduction, a tasty peanut sauce from Vegan with a Vengeance, and a few pieces of grilled tofu made with a marinade from 500 Vegan Recipes (I think it was the recipe for Tofu Satay). I made a few slight changes to each recipe, and they came together wonderfully! We had similar meals a few times after this and they were all equally yummy.

Irish Stew with Potatoes and Seitan from Appetite for Reduction: good solid comfort food. This was the second time I made this recipe and I think I liked it better the first time, but that was mostly due to the type of broth I used. My seitan making skills aren’t perfect yet, either, but I’m getting better! As you can see, I subbed frozen peas for the green beans, which made this dish pretty pantry-friendly as well.

Toast with roasted red pepper hummus and cucumber! Kind of speaks for itself, but I wanted to post the picture ’cause it’s such a tasty combo.

Chickpea Wingz! I might have posted about these before, but they are really great! They’re a wonderful combination of the Chickpea Cutlets from Veganomicon and the Tempeh Wingz from Don’t Eat Off the Sidewalk, united in one recipe by Celine from Have Cake Will Travel. Both those recipes were already favourites of mine, so the idea of combining them is genius! I think they’ve also finally convinced my boyfriend that chickpea cutlets are actually delicious, versatile, and not scary, so I couldn’t be happier.

While I adore big fluffy pitas stuffed with falafel and veggies and tahina, sometimes a tiny pita just can’t hold all the stuff I want to cram into it! That’s why falafel salads are awesome. And I can just have my bread on the side.

Now, this sandwich was excellent. We got it from De Vegetarische Slager, Den Haag’s vegetarian butcher’s shop that makes delicious (and, apparently, realistic) vegetarian and vegan meat analogues. My lunch (pictured above) consisted of saté and coconut peanut sauce on one of their homemade bread rolls, while my boyfriend went for a meatball sandwich. I think it’s really awesome that these people are able to mimic meat dishes so well! I’ve shared their faux meats with my family a few times and everyone agrees that while the taste is delicious, it’s the texture that makes their products so unique and meat-like. My boyfriend and I would probably buy their stuff a lot if we had more money, but for now I guess it’s just for special occasions. I can’t wait to have lunch there again!

Here’s a yummy pumpkin-topped puff pastry thing from a local restaurant called Baklust. I’ve posted about the place before, and this cute little cafe is still one of my favourites!

And for dessert, a slice of orange coconut cake from that same cafe. It was good, but apparently they now also offer vegan chocolate cake, so I clearly need to go back to taste that one too!

Whew! I think I’ve covered most of what I wanted to share, so hopefully my next posts won’t be as random and picture-heavy!

Well, not really, but these parties of people who passed their exams are giving me a great opportunity to bake. I’m not sure if cookies or cake really make a proper gift, but people seem to like them so I guess it’s alright.

Strawberries are in season and as my parents couldn’t stop buying loads of them, I decided to make my friend the Lemon Almond Cake from Yellow Rose Recipes. It’s topped with sliced strawberries, a lemon glaze and toasted almonds. I used less glaze than this recipe made, because I didn’t want to cover it entirely. I love how this cake tastes, though don’t think it would hurt the recipe to use less sugar. The crunchy almonds on top were great.

Apart from the cake, I made a bunch of cookies. The ones I love the most? These:

They look a bit odd in this picture, but it’s the best one I have: Celine’s Double Chocolate Cookies. As I mentioned in my last post, these are so good. I’ve made them at least five times to give away and I had quite a few myself as well… I also made another batch of her Booze it Up Nut Butter cookies, making sure I added enough fat to the batter this time. I didn’t have cashew/macadamia nut butter and was almost out of peanut butter, so I used part almond butter. They turned out very well this time, I’m glad I tried again! I forgot to take a picture, unfortunately.

I made more cookies, but didn’t take pictures of those, either. They were these Whiskey Cookies. They taste awesome, though the flavours in there remind me more of autumn than of summer so I’m not sure why I’m making this time of year, but anyway – I liked them. I’m just wondering if maybe I did something wrong, as mine seem to have turned out different than Celine’s. She mentions how the cookies are crispy, while mine really are more chewy or cake-like, as someone in the comments there discribed. The dough was also different than the cookie doughs I’m used to, it was much more elastic. Interesting! These cookies were fun to make. And to eat.

So yeah, I’ll make sure to remember to take more pictures next time. Come to think of it, I do have some cupcake pictures to share:

I didn’t make them myself, these are Rosey’s Cupcakes, which I bought at a local organic farm last weekend. I chose the chocolate cupcake in the upper picture and had a piece of every cupcake in the other picture. They were very different from the cupcakes I’m used to (the ones from Vegan Cupcakes Take over the World), more like muffins, in my opinion. I think it was partly because the frosting was much less sweet than most of the VCTotW cupcakes. In any case, I loved that chocolate cherry cupcake and it was pretty awesome being able to buy vegan cupcakes so close to home. And they all look so pretty.

One last awesome thing. One of my friends threw a barbecue beach party yesterday and made sure there was some vegan food for me – including this delicious falafel!