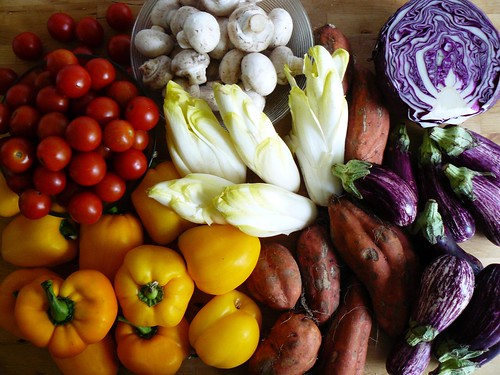 The market was almost over by the time I arrived on this day, so I couldn’t find everything I wanted but I did get a few discounts. This is what I brought home (in the dark, hence the halved cabbage that I didn’t photograph until the next day): seven sweet potatoes for €0.50, eleven yellow peppers for €0.50, a red cabbage for €0.50, tomatoes for €0.50, mushrooms for €1, little aubergines for €1, and five heads of chicory/Belgian endive for €1

And here’s how we ate it: the yellow pepper and aubergine stew with chickpea flour dumplings that I posted about earlier, baked sweet potato chips, cabbage salad, a kind of savoury cobbler with sweet potatoes and white beans, roasted tomato and endive pies, stewed red cabbage with potatoes, stir-fries, and mushroom bitterballen. 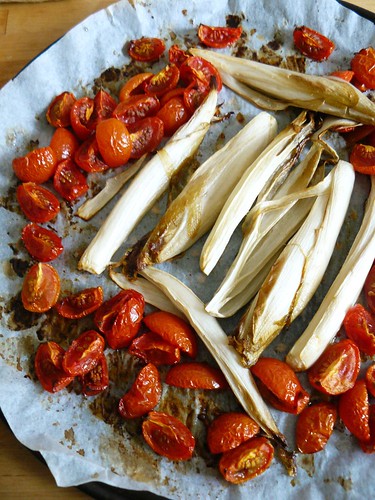 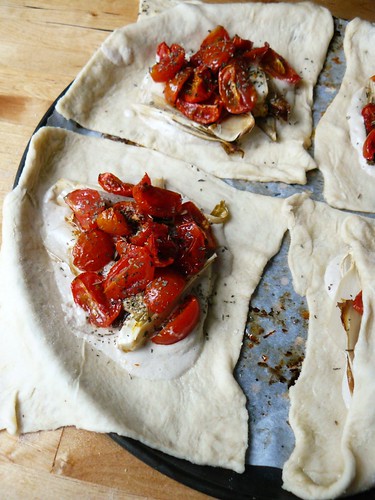 This dish was inspired by something my Mum used to make (original recipe — in Dutch — here). The original consists of boiled chicory, sun-dried tomatoes and cheese wrapped in puff pastry. Of course this could easily be veganised using vegan cheese and pre-made puff pastry, but I wanted to try it with a cheese sauce and home-made pastry. The pastry was not what I wanted but the other elements worked well. I roasted some halved tomatoes at 200 °C (400 °F) for about 50 minutes I decided to do the same with the chicory so I wouldn’t have to boil it in a separate pot. I wrapped the vegetables in pastry with a layer of cheese sauce based on this recipe from Vegetus and baked them until crispy. If chicory’s bitter flavour doesn’t appeal to you, I think a dishes like this are an excellent way to get used to it. 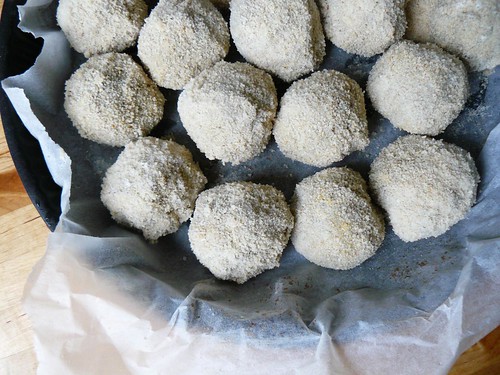 Finally, I decided to try my hand at home-made bitterballen. This snack usually consists of a meat ragout which is rolled into balls, battered, and deep-fried, and served with mustard. I’m pretty sure these are mainly eaten in the Netherlands and Belgium, but if you live elsewhere and you’ve had something similar, I’d love to hear about it! :)

I was half expecting this experiment to be a disaster because I’ve had shop-bought bitterballen fall apart in the deep fryer far too often, but all of these held up beautifully. I only got a picture of the ballen before they were cooked, so the ones above are still very pale, but they came out of the fryer nicely browned and crispy. I made the ragout with mushrooms instead of meat and oil instead of butter, and I used a chickpea flour batter to help the breading stick to the outside. I’d like to post a full recipe sometime, but I’d have to make them again first (poor me, right?).