I was a pretty picky eater growing up. Sure, there were some vegetables I would eat, but I also remember a lot of macaroni with grated cheese, pizza margarita, and plain iceberg lettuce. Thinking about childhood meals for today’s VeganMoFo topic, however, there was one thing I really wanted to make again. 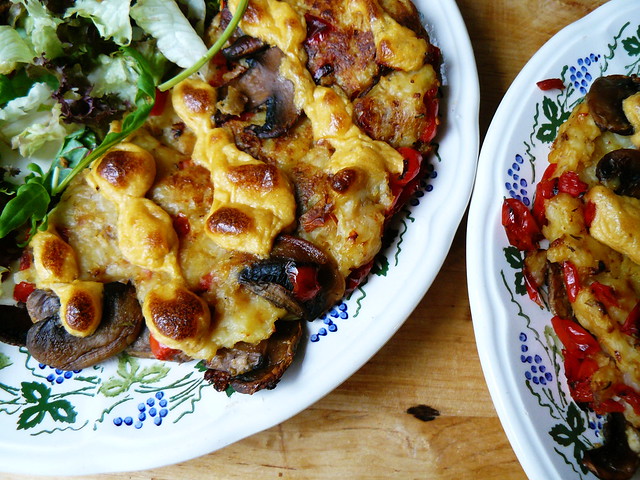 This is what my parents would make with leftover boiled potatoes and whatever else was in the fridge: onions, peppers, maybe a few mushrooms or a tomato. They’d mix it all up in a frying pan and cook it until crispy, then add a layer of cheese on top – which, let’s be honest, was probably my favourite part as a child. We’d call this dish rösti, and I suppose it has the same basic ingredients, just with a few extra things thrown in. It’s a great meal for when you don’t have much energy to cook but you were clever enough to boil a few extra potatoes earlier in the week.

The potato and vegetable part was easy enough to recreate. Grate a few of yesterday’s boiled potatoes and chop an onion, a pepper, or whatever vegetable you like. Add a thin layer of oil to a frying pan, and cook the potatoes and vegetables until they’re as crispy as you like them. As it cooks, flip the rösti every few minutes: it will keep falling apart at first, but that just means you’ll have more brown crispy parts mixed in, and eventually it’ll form one big disk.

The cheese portion was a little trickier to veganise. There are vegan cheeses that would be great here, but I rarely have them on hand, and this dish is about using whatever you have in the fridge. Instead, I made a cheesy sauce with sunflower seeds, miso, roasted red pepper, and a few other ingredients that are always in my cupboards. The sauce required an extra pot and some stirring and blending, so it didn’t exactly fit my no-fuss meal criterion – but it did provide the flavour profile I was looking to recreate, and I made enough to go with several batches of rösti. 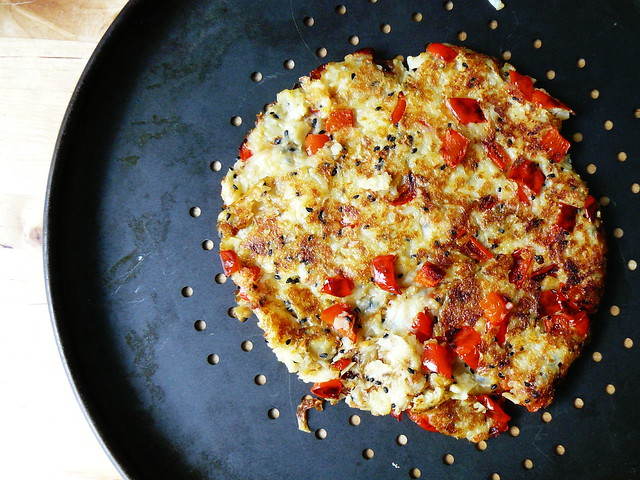 My favourite mix-ins are onions, red peppers, garlic, and mushrooms. I was out of onions when I made the rösti pictured above, so I added a teaspoon of nigella seeds. 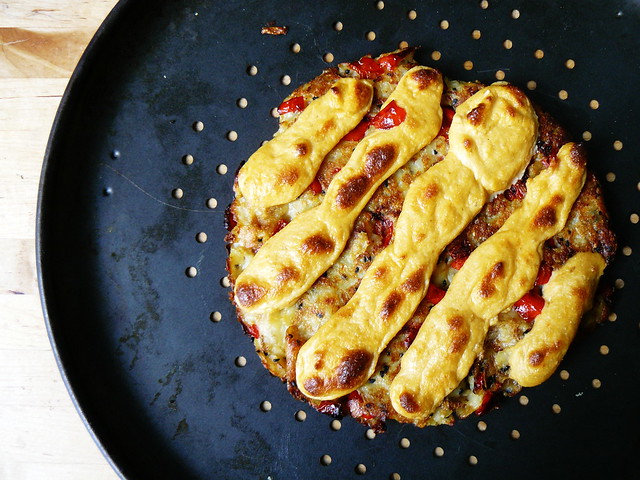 To get everything extra browned and crispy, I placed the rösti in the oven for a few minutes after covering it with the sauce. I was actually surprised by how much I liked it before adding the sauce, too – I guess I’m not as addicted to cheese as I used to be. :)

Some of my favourite posts from today:
– On Instagram, Bianca from Elephantastic Vegan also posted a childhood meal involving crispy potatoes and veggies! It’s called Gröstl and I’d never heard of it, but I know I want to eat it.
– Jenny from Herbivore’s Heaven is taking us with her on a quest to find the best vegan cooked breakfast.
– Maya from Singeries & Boules de Riz shares her vegan version of creamy mushroom pasta as well as a few ways to make a childhood meal appear more grown up.