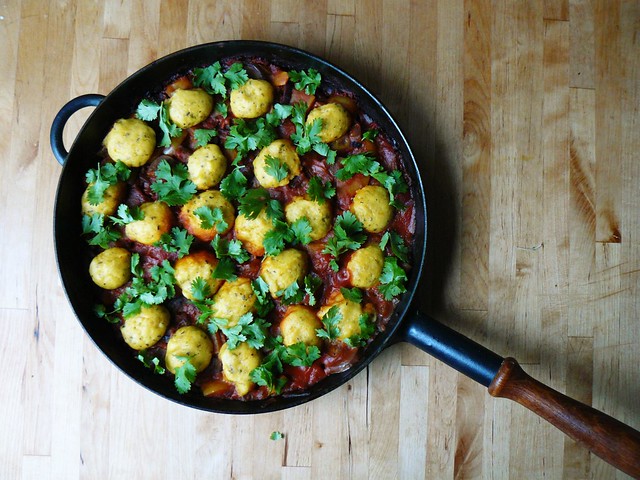 I first made this stew after I kept seeing blog posts about shakshuka, which is a dish of eggs cooked in a spicy tomato sauce. I’ve never actually had shakshuka but I tried to imagine a vegan version, and whenever I think egg replacement I think chickpea flour. Of course these dumplings are nothing like eggs — and you definitely wouldn’t want to undercook them to dip your toast in the middle — but I liked this stew so much that I decided to share the recipe anyway. I’ll have to look for vegan shakshuka elsewhere (Terry Hope Romero has a recipe I’d love to try!).

I’ve made several versions of the sauce (some with just onions and peppers and another with quartered cherry tomatoes added in), so if you’re not an aubergine/eggplant fan you can just leave it out. If you’re like me and spicy food makes you cry, don’t be a hero; just take the seeds out of the chillies. Maybe we’ll get there someday.

I’ve written the recipe the way I prepare it, which is by adding the vegetables to the pan as I’m chopping them, but if you like mise en place of course you can chop everything in advance. I think it makes for a good one-pot meal on its own, but I definitely wouldn’t say no to some fresh bread on the side.

1. Place a large frying pan or sauté pan over low to medium heat and add in the olive oil. Quarter and slice the onion and add it to the pan. Keep stirring occasionally as you add the other vegetables.

2. Depending on the size of your aubergine, halve or quarter it and cut it into 1/2-cm (1/5-inch) slices. Add it to pan with the onion. Remove the stems and seeds from the peppers, roughly chop them, and mix them into the onions en aubergine. Mince the garlic and thinly slice the chilli (removing the seeds if you want to), then add both of those to the pan as well.

3. Add the cumin, paprika, and tomato passata to the frying pan, stir to coat the vegetables, turn the heat up, and cover the pan to bring it to a simmer while you make the dumpling batter.

4. To make the dumplings, mix together the chickpea flour, salt, baking powder, and oregano in a small mixing bowl. Add the olive oil and mix in the water a little at a time, starting with a few tablespoons and mixing until smooth — I find that this helps to prevent lumps. The batter should be thick but quite smooth.

5. Once the sauce in the frying pan has come to the boil, turn the heat down to low and add in the dumplings by dropping teaspoon-sized blobs of the batter all over the sauce. Put the lid back on the pan and let it simmer until the vegetables are soft and the dumplings are cooked; I’ve found this can take 10-20 minutes depending on the tightness of the lid. When you press on a dumpling with your finger, the surface should spring back; if it just forms an indentation, you should let it cook for a bit longer.

6. Ladle the sauce and dumplings into bowls, sprinkle it with fresh herbs (if using) and serve it on its own or with bread. 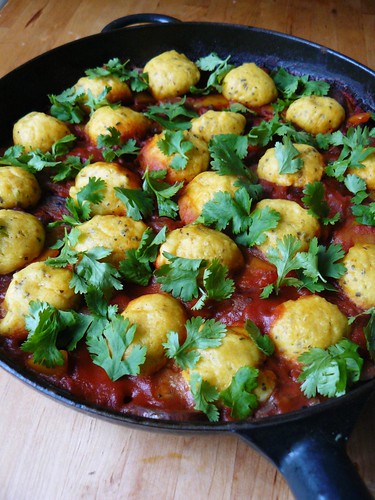