Last year on my birthday, I posted a list of foods I had never made that I wanted to try my hand at. I haven’t crossed off all the items — mostly because I never seem to have the right ingredients and the required equipment on hand at the same time — but I’ve tried enough to post a few short updates.

2: Ciabatta
I made this last summer following a recipe by Bryanna Clark Grogan. I still have to try it again without a bread machine.

3: Baguettes
I’ve tried a few recipes, but none have turned out as crusty as I’d like. I’m going to look for more. 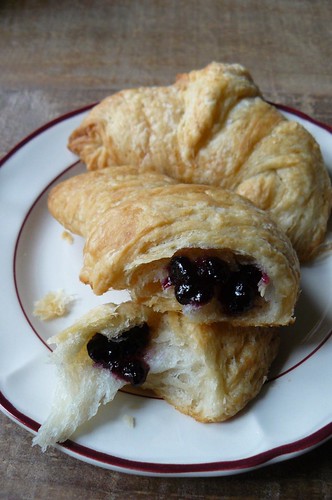 I’ve made a few attempts using several croissant recipes but I still have to get the hang of them. The photo above shows my second attempt: pretty good, but I used a little too much flour while folding the dough so that the resulting croissants weren’t soft enough. Hopefully I’ll be able to post an update soon!

8: Calzone
I have to make these more often. We make pizza a lot but our oven is very small, so folding the dough in two seems like the clever thing to do. The most recent calzone I made were filled with aubergine, courgette, red pepper, onion, and pesto with a tomato dipping sauce on the side.

9: Samosas
I’ve tried a few recipes so far, but I haven’t found a real favourite yet. I’ve used this recipe as a guide a few times (especially the step-by-step pictures for the folding process!) and I’ve made both fried and baked versions.

12: Sushi that I like
I included this on the list because I used to dislike nori, but I’m OK with it now. Earlier this month I also posted about sushi without nori.

14: Beetroot risotto
Love it. I blogged about it here and here. 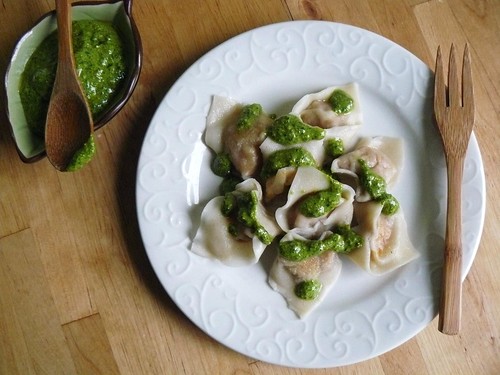 I made these over a year ago so I’ve almost forgotten how frustrating it is to fill and boiling all those little pockets without having the contents leak out. Fortunately, they were also very delicious. The filling consisted of pureed roasted carrots, onion, and cashews and the sauce was a fresh coriander pesto.

16: Vegetable stock
I posted about this during last year’s MoFo, but I still mostly use stock cubes. I’d like to make it more frequently.

19: Aubergine bacon etc
I made Isa’s eggplant bacon once to go into a salad, but there are still so many other types of vegan bacon to try! Next time I have liquid smoke on hand I’d like to try coconut bacon.

20: Something with jackfruit
I found jackfruit in a can at the Amazing Oriental supermarket and more or less followed the recipe for the Jackfruit Carnitas from Vegan Eats World. We had it in wraps with fresh coriander and the pickled red onions from Viva Vegan!. Despite its hearty flavour in this recipe, the jackfruit isn’t very filling on it’s own, so I made the refried beans from Appetite for Reduction to go with it for extra protein. I haven’t cooked with jackfruit since then but I think I’ll pick it up again if it’s on sale. 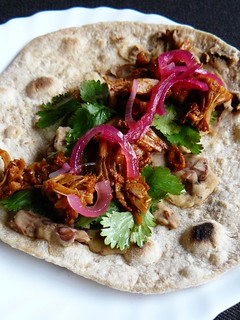 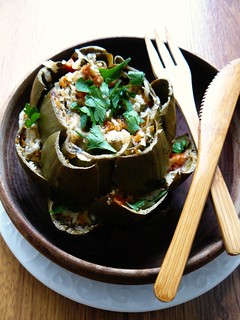 21: Stuffed artichokes
I was really looking forward to these because I love artichokes and I don’t buy them very often, but I was a little disappointed. I used a simple recipe for the stuffing that mostly consisted of breadcrumbs and herbs, so maybe I’ll try again with more exciting ingredients and young artichokes. For now, I’m sticking to unstuffed artichokes — they’re less work and at least as delicious.