I kept seeing people on cooking shows preparing dishes en papillote and it looked pretty and I wanted to try it too. I think this technique is mostly used for fish (maybe it would work well on seitan?) but I decided to use it for fennel, one of my favourite vegetables.

I also cooked up a pot of gnocchi again because I love making them, even though mine always turn into irregular lumps rather than pretty pillows (at least this way they’re quicker to make). (And look, it’s a post with an actual recipe! I thought I’d try that for a change). 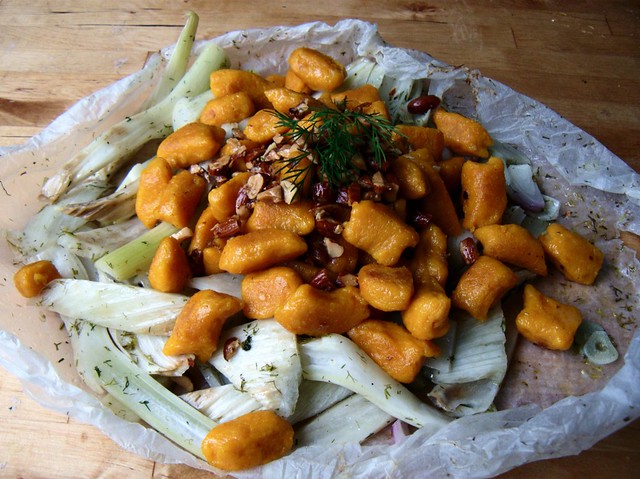 For the almonds:
1 tablespoon olive oil
3 tablespoons chopped almonds (or sliced almonds if you have them)
a pinch of salt

2. Bring a large pot of salted water to the boil. Add the carrots and boil them for about 10 minutes. Scoop the carrots out of the pot but leave the water; you can use it to boil the gnocchi later. Drain the carrots well and leave them to cool for a bit.

3. Meanwhile, prep the rest of the vegetables. Remove the root of the fennel bulb and separate the leaves. Rinse them to get rid of any dirt and remove any dark or wilted parts, but reserve the little green fronds. Slice the fennel 1-2 cm (1/2-1 inch) thick and mince the fronds.

4. Place a large piece of aluminium foil or parchment paper on a baking sheet (I preferred foil; see the note below). Place the fennel and fennel fronds on the baking sheet along with the shallots, dill, lemon juice, and a pinch of salt and pepper. Mix everything together with your hands, fold the foil or baking paper over the vegetables and seal the edges of the parcel so no steam can escape (see the link at the bottom of this post for a video). Put the baking sheet in the oven for 20-30 minutes (depending on how soft you like your vegetables).

5. Puree the carrot, which will mostly have cooled down by now, with the olive oil and salt using a blender or food processor (a stick blender works fine as long as the carrot is soft). Start incorporating the flour: stir it into the carrot puree a few tablespoons at a time until the dough becomes too stiff to stir. Dust your work surface with flour and knead the dough a few times but add as little flour as possible. Divide the dough into four parts and roll each piece into a 30-cm (12-inch) rope. Cut the ropes into rectangular chunks to form the gnocchi. I like to put the finished gnocchi on a clean tea towel so they don’t stick to the work surface and I can easily lift them to transfer them to the pot.

6. Bring the pot of water that you used to cook the carrots to the boil again. Add the gnocchi, cover the pot with a lid, and let the gnocchi cook gently until they float to the surface — a few minutes. Remove the gnocchi (I scoop them from the pan using a sieve because they can be very delicate) and let them drain well.

7. While the gnocchi are cooking, heat the olive oil and chopped almonds in a large frying pan over medium heat until the almonds are lightly browned. Sprinkle them with the pinch of salt, scoop them from the pan, and set them aside for now. Now add the drained carrot gnocchi to the pan and pan-fry them in the olive oil for a few minutes until some of the edges are golden brown, stirring every now and then.

8. By now the fennel should be ready as well. Remove the parcel from the oven and add the contents to the pan of gnocchi along with the toasted almonds. Stir everything together, divide between two bowls and serve immediately. 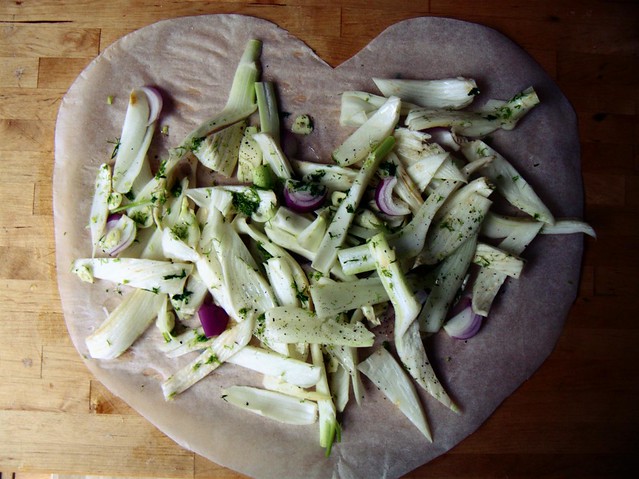 A note about sealing the vegetables in the parcel: this video demonstrates how to seal the parchment paper so no steam can escape. Unfortunately my piece of paper was too small and my fennel bulb was too big, so I couldn’t seal the parcel with having it tear. If the same happens to you or you’d like to prevent it from happening, you can add an extra layer of aluminium foil (or just use foil to begin with) — as long as the parcel is sealed well. 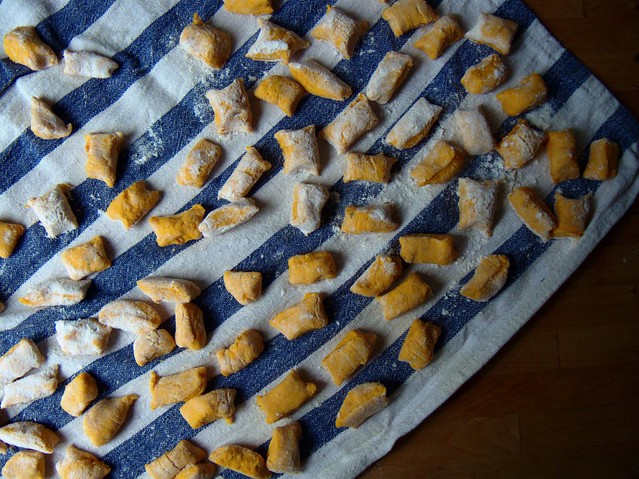